The Honor of Allan (the Craig) Franklin 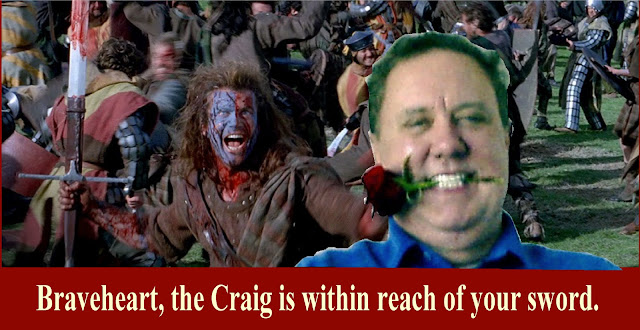 When my mother lay dying she asked me to find her history for her. My father's was well known but she had always hungered to know her ancestors. I made promise to do this, even though we both knew it would not be before she died.

When we buried her I renewed my promise.  Each time I went to stand by her stone I spoke to her of what had been done.    This searching began in 1987.  Mother had died on September 15th.

It was a struggle. Then, slowly, slowly, a drop at a time, a name, a line, a place, and then a gush of findings and names came out of the past into my hands through the work of cousins living and dead. I was grateful for their help. My promise was redeemed.

Then, a book arrived, "McReynolds - A Noble Clan," purchased in the hope it would uncover the past and fulfill my pledge. Turning the pages, slow and careful, I found myself in a different world. The generations were many. Mother counted her descent from Robert the Bruce, through women and men, brave and good, hardened and determined.

Reading their stories through the long stretch the time which divided us I learned of their struggles.  Their lives were harsh, demanding.  Of need, they bred their sons to be warriors of supreme skill and determination. Forced from their homeland to America they brought rememberings with them.

I discovered this in bare time to take the knowledge into the theater with me and see Braveheart. Robert the Bruce was just a name when the lights went dim. Into that theater came my husband, a Craig, who had boasted of his Highland blood.

When we left the dim light and the stilled screen we were both silent. He never again spoke of his roots.

The Bruce redeemed himself; the Craig did not.  Wallace was dead, deceived and betrayed by the Craig.

I would discover that Craigs breed true to their falsity, at least on the line of Craig Franklin. Some stories are too true to recount whole in one speaking. This is one such story.