The Glories of Christmas, gifts past and yet to be. 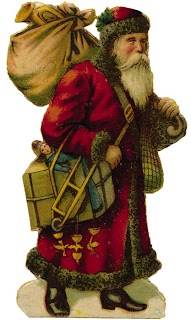 We all go through some hard times. Perhaps not like we are about to experience, but hard. Hard times teach us things that otherwise we would not probably learn.

This Christmas many people are buying less. Many families are buying just one gift for each child instead of filling up the places under the Christmas tree. All of us will learn unexpected lessons in the months and years to come as our nation is humbled. If you had not guessed, that is going to happen.

I suspect that those lessons learned will eventually be viewed not as deprivation but as experiences that refocused us, enriching our lives in ways we did not imagine possible. Hardships bring their own kinds of gifts.

Many children are now learning what it means to have a job far earlier than they imagined it would be necessary. And yet the most significant correlation between future success and experience is how early you held a job and carried it out successfully.

Working is no hardship.

You could say that my first job was ironing handkerchiefs and shirts for my sister. I received $.01 per kerchief, $.15 per dress shirt. At first it took a long time for each kerchief and shirt. I got better and faster.

This was before anything was permanently pressed. I was around seven years old then and my mother used to move the ironing board down as low as possible to accommodate me. I piled the kerchiefs up carefully and buttoned up the shirts so they would not wrinkle.

My next job was selling lemonade and candy bars. The lemons were free. I walked to Savon to buy the candy bars; three for a dime, selling them for a nickel each. We had a lemon tree in the back yard at that point in time. The lemon tree figured in a special part of my life when I was young. Not only did I climb the tree and pick lemons to make that lemonade, I learned important things there.

Along with working I learned the most important lessons life held for me from things I saw, experienced, and learned from people around me.

There were lots of reasons to climb the lemon tree. I climbed that tree for the smell and for the hidey place that Mother had not figured out yet. In a large family alone time is hard to come by.

The tree did not fork for about four feet so at that point in my life getting up to a branch was a little tricky. This involved either a running start or jumping. After getting a firm grip on the lower branch I would haul myself up and into the cocoon of leaves that made a small cave. I had discovered that I could not be seen when I was there if I was quiet and remained still. I had pointed out this advantage to my friend, Jimmy.

Jimmy is James Dean. To the world at large he is an actor but he was my best friend when I was little. Sometimes, though not nearly often enough, Jimmy came over for lunch and to talk to my mother and to me. A visit usually meant a walk in the back yard to view the roses; Mom was always fighting mighty battles with the aphids there and Jimmy was one of the few people who was interested in those battles. I had told him about the hidey place in the lemon tree. He had nodded. Hiding places were things he had enjoyed, too. But living on a farm he had many more than were available to me in a house in the suburbs.

After I was in the little cocoon I would curl my feet into the crook between the branches and put my face against the bark. That was where the smell was strongest, but I knew that when I climbed down I would carry the smell around with me for the rest of the day, taking it to bed with me.

I think of this as the afternoon of the Lemon Tree. I climbed the lemon tree while Jimmy was finishing up drying dishes with Mom in the house.

I could see out when the wind moved the leaves. While I was lying there soaking up the scent of lemon Jimmy came out and looked around. I did not move. Then he laid down on the grass just where the Avocado Tree cast its shade onto the lawn. It was very green then and the longest it was allowed to get because the next day Father would cut it. The dandelions had been busy and several golden little crowns of flower were nodding right there in the grass. Jimmy put his arms behind his head and sighed a big sigh. His eyes closed. I kept watching him, not speaking. He made snoring sounds but I knew he was not really asleep. He liked to pretend.

Then he sat up. He looked right at me in the lemon tree though I was sure he couldn't really see me. Then he said, “Trees breathe.” He said it long, dragging out the sounds of the words and making them kind of scary. I looked around me. The tree had not changed. I could not hear anything that sounded like breathing. He said it again. “Trees breathe.” This time he made little gasping and choking noises like he was dying and collapsed down onto his back.

That was too much. I jumped down and walked over to him. He sat up as soon as I dropped out of the tree. I put my fists on my hips and said, “Trees do not breathe. I have never heard any tree breathe.” I was annoyed. Jimmy was saying things that were not true, I thought.

Jimmy said for the third time but this time he said it differently, smoothly with no scary in it at all. “Trees breathe; they breath in light,” he glanced up, not looking at me but past me to the sky and the sun, “and breathe out life.” With that he looked back at me and gently blew right into my face.

I sat down on the grass, still looked at him, waiting for him to say more. I knew he would. Jimmy did not just say something and expect me to accept it without explanation.

Jimmy went on to explain to me that trees use the energy of the sun to make oxygen, which we breathe in to our lungs to keep us alive. Oxygen, he said, is like the sun flowing through us and since it comes from trees and other green, growing things, it unites us with the lovely green world of grass and trees and all of the growing things on Earth.

“That includes dandelions,” he said. He plucked one right then and handed it to me. I looked at it. It had so many slender little petals reaching out from the middle like tiny arms. I touched the center with my finger and then with my nose. The center was soft like a piece of velvet I kept in the bottom of a little box in my bedroom for storing precious things.

Dandelions are nearly the same color as lemons, I thought. I smelled it. It did not smell like lemon but I liked it. I sniffed again, smelling for the life it had breathed in along with the sunlight.

Gifts can come in boxes under the Christmas Tree but they come in other ways, too. The Story of the Lemon Tree was a gift from Jimmy.

Jimmy stopped coming over to the house in 1955 due to unavoidable circumstances.

Making gifts out of not much was something Jimmy taught me. I had the dandelion for many years, until it fell into a pile of dust.

When I was still in college and the economy was grinding to a stop in 1970 I faced one Christmas with just $5.47 for buying presents for family and friends.

At that point in my life, as you can see, I counted every penny.

I loved giving presents and spent a lot of time thinking about what would please the person to be gifted.

Fortunately, I was handy with a needle, although I did not have access to a sewing machine.

Since I had so little money I innovated, making little rosettes filled with highly aromatic, rose scented powder out of scraps left from other projects. I stuffed then with cotton left over from bottles of pills I had thriftily saved. These would have served, just as they were to lavishly scent drawers filled with delicate hosiery and such but I looked at what I had available and bought for the three ladies on my list, my mother and two sisters, clear glass containers into which I poured bath salts I had bought in bulk for $.59. The three glass containers I got on sale for $.39 each.

I tied the cachets on the tops. They looked very nice and delighted their recipients.

I don't remember what I made for my brothers, but it cost less than $.56 each. For my father I bought a plastic butter dish, filling it with scrolls of jobs I would do for him, when he needed them. One was sweeping out the garage, I remember.

Dad had once told me he wanted a butter dish like this for the cabin. He understood, though no one else did. They all scratched their heads. He smiled. Dad always understood.

The best gifts are the ones that become part of who you become. The people in our lives are, themselves, gifts.

Have a Merry Christmas, filled with glorious gifts, given and received.

Posted by Melinda Pillsbury-Foster at 5:45 PM No comments: